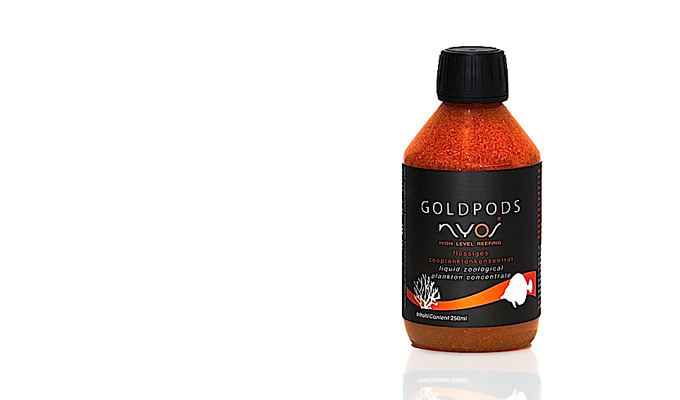 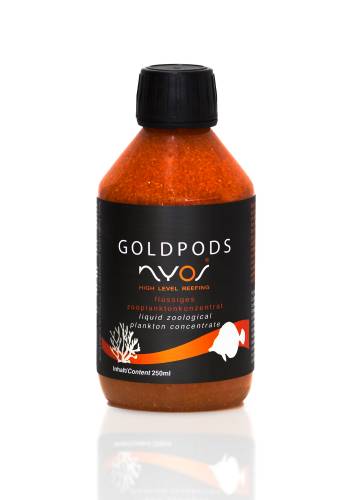 I’m using the NYOS Goldpods almost daily since around one year and have now used up almost 2 bottles. So it’s time now to put the LPS and fishfood a little more into focus.

NYOS Goldpods are a LPS & fish food in one bottle – a liquid zooplancton containing Calanus (which some of you may know as frozen food).

The Goldpods are a relatively viscous liquid – small Calanus are tied in a jelly-like mass. Over time and with increasing consumption, the mass is always less viscous, which probably has to do with the type of preservation.

At first I dosed via the included measuring cup, but I am now mixing the Golpods with some water first, before feeding them.  This makes them spread faster in the tank.

Therefore, I turn off the flow, put some Goldpods in a vessel with some water and then give it with a long pipette directly to the polyps. They respond immediately by extending their tentacles out and eat them directly. After about 10 minutes I turn the flow back on.

In my tank they are eaten by: 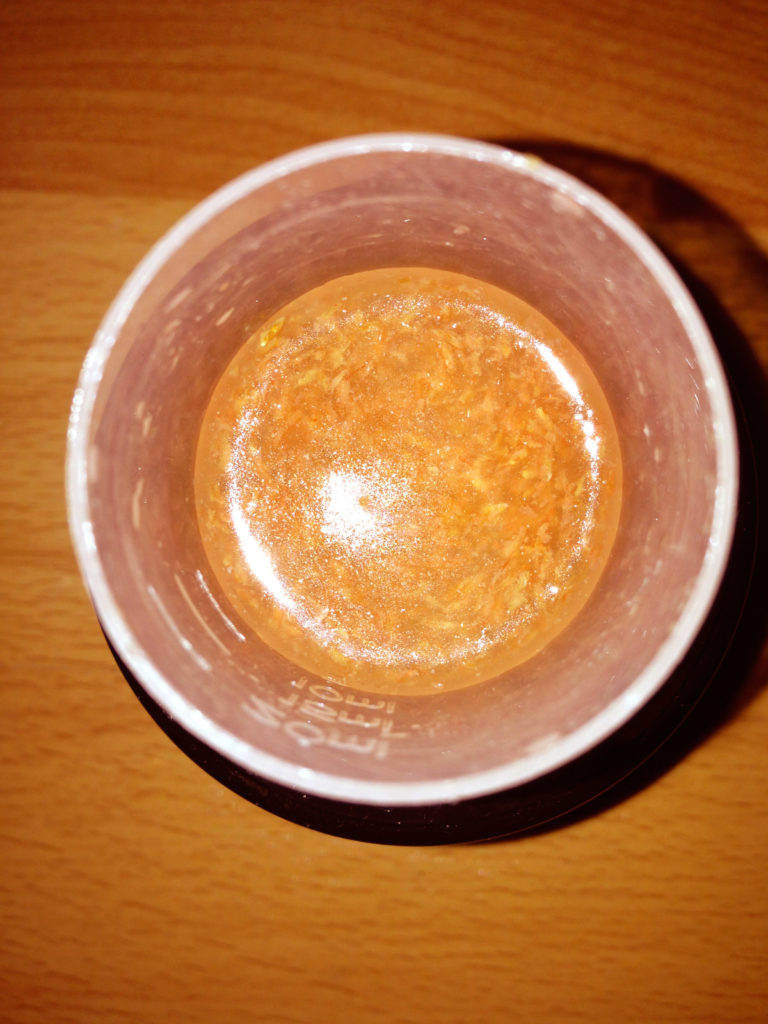 They are not eaten by:
– SPS
– Zoanthus

I recognized a significant increase in vitality, color and reproduction especially at Acanthastrea. Even Fungias “blow up” after feeding and are very healthy. Favia, Favites and Lobophyllia are normally eating very slowly, which is a slight disadvantage, because the delicious Calanus are oftentimes picked out by fish or hermit crabs.

Here’s a video of my Acanthastrea eating Goldpods:

As I have already fed frozen Calanus before using the GOLDPODS, my fish mostly knew the raw material, which they liked very much.
I’m feeding my fish with Goldpods always in the morning, because I do not have so much time to defrost frozen food. Just quickly add some delicious Goldpods out of the bottle – this is fun!

However, one must mention that not all fish eat the NYOS Goldpods. So my C. rostratus eats them only sometimes. I have the impression that most open water plankton feeders such as chromis, anthias and various angelfish particularly like the food. But I can also imagine that the food is too small for some fish.

A side note: My hermit crabs freak out when they “smell”  Goldpods!

And for sure, here’s the video of the manufacturer NYOS: